Mervi is motivated by the challenges of her customers and believes that determination will get you through anything.

Mervi Matilainen, the Managing Director of Apila Group, has worked in research and development in the chemical industry since 1998 and in the circular economy industry since 2005. In the work community, Mervi is characterized as an innovative motivator and courageous visionary. “It’s nice to be seen as such because I strive for it. I think it is important to encourage the staff because our work is based on the people and their skills.”

As Managing Director, Mervi is responsible for corporate management tasks, networking and strategic planning. “When working at the customer interface, my goal is to bring innovation and bold proposals in response to customer needs. It is important to dare to think that nothing is impossible.”

“Once you know chemistry, you can find a solution to any problem. One must not think narrowly.” 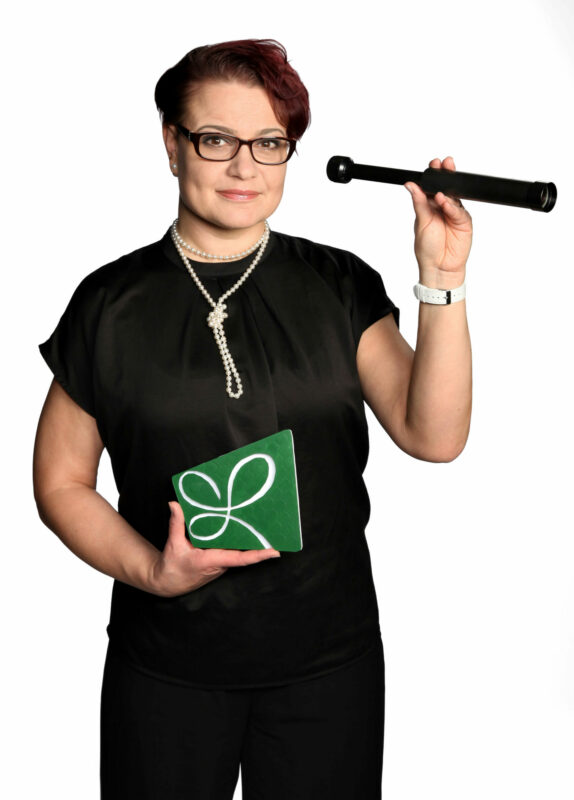 Before Apila, Mervi worked as a researcher in science, working on her dissertation in the field of inorganic chemistry. From those days, she accumulated knowledge of research- and analytical methods and the skill to find things out. Mervi ended up in the circular economy at the end of her research career. She found that there were problems in the backyards of the factories, and she was motivated to solve them. There was plenty to do. “At that time, no one cared what was in the backyard since the money came from the end product.” On her own, Mervi found a research topic in the industry, created a network and launched a 3-year project to develop cleaning and recovery methods for the pulp industry’s most significant solid waste, soda ash.

As a project manager, Mervi increased her skills in creating networks, applying for funding and leading projects. These skills became useful in the spring of 2009. At the end of the project, a co-worker told Mervi about a job advertisement looking for a “creative chemist” for Apila’s networks. Mervi was the first to call about the job, and soon she was already planning a company strategy. “I’ve been trying to hold on to that creativity through the years.”

In her work, Mervi enjoys making new, innovative proposals the most. “When you study things through chemistry, nothing seems impossible. It also feels good to get others excited about new ideas and possibilities.” Unfortunately, due to her busy schedule, Mervi no longer has time to be involved in finalizing the projects. “But luckily, we have extremely skilled staff here in Apila,” Mervi smiles. Still, the longing to immerse herself in the practical work is strong: “The design phase visualizes work steps and experiments, and it’s unfortunate not to have time to be involved in carrying them out.”

Mervi’s firm belief that nothing is impossible and there is a solution to everything is crystallized in her motto: “One is capable of anything as long as one works enough for it.” Achieving goals is guided by perseverance, as well as a curious, open mind. Perseverance has also produced the most significant achievements of Mervi’s career. When Apila started, people didn’t talk about the circular economy, so raising business to this level in a difficult sector has been a significant achievement. Among the company’s accomplishments, Mervi highlights the material created by Apila, developed from side streams, which cleans harmful metals from water. The innovation has also been awarded the Start Me Up Business Idea Award.

Mervi does not have one particular area of expertise but instead describes herself as a multi-expert. “I can handle large amounts of information rationally. As a result, my strength is planning new projects from start to finish.” For example, Mervi cites a large UIR project where she worked as one of the chief designers. One of Mervi’s gifts is to combine the things she learns or hears efficiently and quickly. That helps her to pick out the things that affect each other and combine them. “Solutions are sometimes very inventive when you dare to think outside the box.”

Mervi is motivated by thinking out innovative solutions to customer challenges and encouraging customers to try solutions boldly. Coming up with quick and agile tests, typically done in quick and dirty -type projects, get new ideas flowing. Mervi knows that when working with customers, it is vital to have a certain immediacy, that the customer knows that they are getting what they have been promised.

“A client said that consultants need to be let close for the result to be good.” After a successful project, the best reward is always a thank you from the customer. “Once after a completion of a project, a customer said that they’ll give us a review of three smiley faces,” Mervi says.

Apila Group and the circular economy

Apila has changed a lot since Mervi started working in the company, but the world has changed even more. “At the time, the concept of the circular economy wasn’t widely acknowledged. As a company, we have been able to develop with the term circular economy.” Initially, Apila was a network of experts. Now it has grown into a company. While the core business – finding a solution to a customer’s problem – has remained the same, researching the network was difficult, and customers wanted ready-made solutions. When Mervi became Managing Director in 2012, Apila Group had an office room in Joensuu Science Park. In 2018, operations moved to the Kontiolahti industrial hall, and now the entire building with its offices and halls is in Apila’s use.

The advancements have by no means stopped here. Mervi strives to improve both the company and herself as a leader. “When one is in this role, strengthening strategic leadership is one of our top goals.” The company also invests in finding, mapping and developing digital solutions.

As a child, Mervi dreamed of a career as an architect, but now, above all else, she wants to be happy. “A person is happy and thrives when they’re living a life that fits their values.”

This was the 4rd part of the Apila staff presentation series. You can read previous presentations here: