Chemistry expert Tiina Rasilainen was going to be a ski jumper when she grew up. However, analytical and meticulous Tiina ended up in a profession that requires a different kind of agility and innovation.

In Apila Group, Tiina is known as a quick-witted project completer. Tiina was surprised by her co-workers’ characterization. “It’s nice to be told that I’m quick-witted. I was an extremely shy child, always the quietest in the group.” In Apila, Tiina works as a project manager, and she is responsible for them from start to finish – from planning to the return of the final report. The most challenging thing in Tiina’s work is scheduling projects and having to consider all the other things that the participants in the project have going on at the same time. 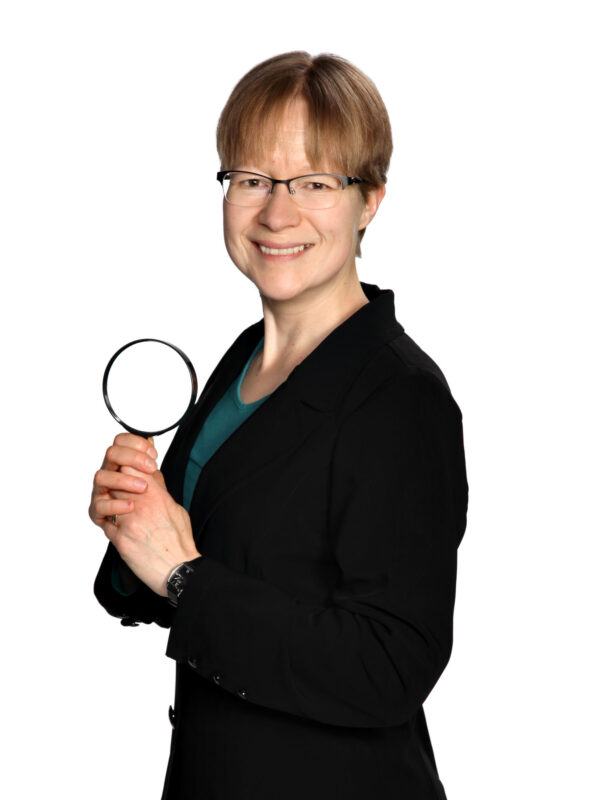 Tiina’s working philosophy is characterised by a desire to strive to do everything as well as possible. As a project manager, her handwork is especially visible in the final report returned to the client. “The final report needs to answer the questions the customer has. It must be understandable, and it will also be returned to the customer when promised.” Keeping to agreed schedules is essential, but so is investing in writing. The goal is to produce good text that converts information into an easy-to-read format. This way, the customer does not need to be a chemistry expert to get the essential information out of the report. The best reward for all the work is a satisfied customer and the customer’s follow-up order. Receiving concrete praise from, for example, the work community also always feels good.

“Looking through a bigger scope”

When Tiina grew up, she was going to become a ski jumper or a professor of biology. “That stopped when I realised it wouldn’t be too much fun to wade through the bushes in search of plants and animals,” Tiina laughs. Instead of biology, Tiina first studied environmental technology at a polytechnic and then physical chemistry at the university, all the way up to a doctorate. The dissertation was an important moment for Tiina in her career, as it was self-designed from start to finish, and the related laboratory tests were self-made. After her dissertation, Tiina worked as a postdoctoral researcher at the university, focusing on microstructures and nanostructures for polymer surfaces. The research was interesting and laid the groundwork for research into practical applications.

Tiina was in contact with Apila Group for the first time when she heard that the company was considering hiring a chemist. Discussions took place, but then Tiina got a permanent job from the Radiation and Nuclear Safety Authority’s regional laboratory in Rovaniemi.

Tiina’s and Apila Group’s paths crossed again four years later when Tiina moved to Rääkkylä. Tiina heard from her husband about a project that sought new uses for the laboratory facilities in the Rääkkylä town hall. When inquiring about the Central Karelian Development Company, she heard that Mervi Matilainen from Apila Group handled the practical side of the project. It was easy to sign an employment contract because they had already discussed Tiina’s background and experience once before.

“Working in Apila fits my values”

Tiina ended up in Apila Group and in the circular economy by chance. Tiina has always been interested in environmental issues and, in her own life, tries to minimise her impact on nature. “I like to work in Apila because I feel that my work matters. It may sound naive to say this, but I feel that I am making the world a better place through my work in Apila.” Apila Group works to find new uses for waste materials and determine the amount of microplastics in the environment.

Tiina also enjoys practical experiments. “When you see from test results that the solution works or make an observation no one else has made yet are the wow-moments of the work.”

For Tiina, the circular economy means that once-used materials are reused so that they don’t end up as waste. This will prevent the over-consumption of natural resources. Tiina feels that she can promote the circular economy with her skills, especially because they combine chemistry and technology, enabling her to look at things from a wider angle and attention to detail.

During the time that Tiina has been in Apila, Apila has changed a lot. When Tiina started there, only two people worked in Apila, and Tiina was the first to be hired on an employment contract. At that time, Apila’s laboratory facilities were located in Rääkkylä, and Apila rented them on an hourly basis. When Tiina returned from family leave in early 2019, Apila’s premises had moved to Lehmo, and the number of staff tripled. “The work we do has grown and expanded a lot, and the company’s outward operations are much more notable.” Now Apila is much more visible to corporate customers, and the laboratory has the capacity to accept much larger assignments.

“Paying attention to detail and designing something new”

In a professional sense, Tiina closely follows news and research about radiation safety. Topics related to the state of the environment are also of interest, such as the climate and microplastics. Tiina is looking forward to joining new projects. Tiina mentions tire materials and the discovery of new uses for tires as exciting projects. “It’s an inspiring thing you can do with tire materials. When you know a lot about them, it’s easy to start thinking about something new.” Another example relates to the design of a mobile laboratory where Tiina could use her strengths: focus on quality, detail and compliance.

And what plans does Tiina have? Tiina sees herself working at Apila for the long haul and doesn’t see any need for changes in her job description. However, Tiina has been writing since she was a child, and she hopes to become a published author one day. But at the moment, there’s not enough time for that.

Tiina’s family includes her husband and a 4-year-old child, so any free time she has is spent on the edge of the sandbox and the ground, watching as ants go about their business. The positive side of spending time with a child is that it effectively takes your thoughts away from work. “I’m also good at waking up early,” Tiina adds with a laugh.